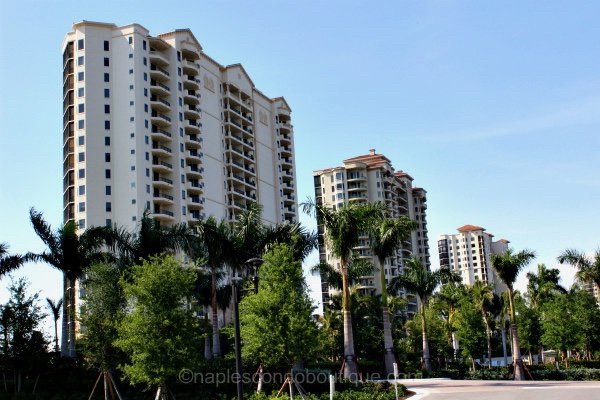 The Colony Golf & Bay Club is a gated, upscale resort community located in Bonita Springs, between Naples and Fort Myers.  A subdivision of Pelican Landing, The Colony offers a variety of housing options to meet the varying lifestyle needs of its residents, including a mix of different condominium options ranging from six luxury towers to three upscale mid rise developments.

The high-rises include The Navona, The Palermo, The Sorrento, The Scala, The Florencia, and The Treviso soaring from 14 to 21 levels.  Castella is perhaps the best known mid rise building in The Colony subdivision with the newly released Terzetto and Cielo buildings quickly garnering raves.  Sweeping views are a mainstay of condo living at The Colony as well as a host of onsite building amenities, including a resort pool, social room, and movie theater.  Residents can also take advantage of The Colony's amenity package, including a private Beach Club, tennis courts, championship golf, and spa and state-of-the-art fitness center.

The Colony is located on Pelican Colony Boulevard west of US 41 between Corkscrew Road and Bonita Beach Road.

The Colony Condos For Sale