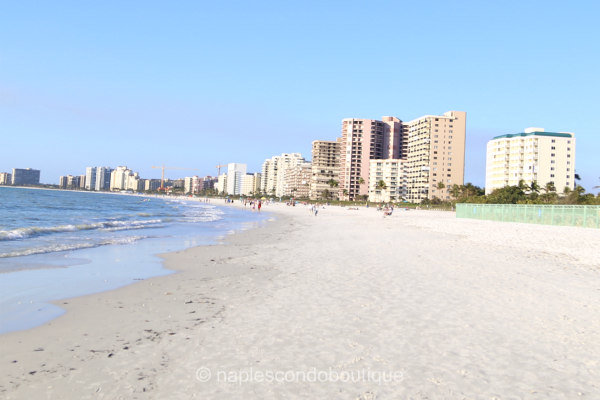 Marco Island is a barrier island located to the southwest of Naples in Collier Country. It is the largest and most developed of the Ten Thousand Barrier Islands located along the coast of Southwest Florida. Marco Island is known for its white sandy Gulf of Mexico beaches which are lined with condo developments, resorts and luxurious homes. About 17,000 residents make their permanent home on this tropical island.  Read more about Marco Island real estate.

Located on the edge of the Gulf of Mexico and 20 miles south of Naples in Collier County, Florida, Marco Island is the largest barrier island of the famed Ten Thousand Islands. Not surprisingly, for a year-round beach and boating resort area, approximately 47% of Marco's 24 square miles is water. The six miles of Marco Island beaches are among the broadest expanse of white, sugary sand, punctuated by private areas for residents and offshore island beaches such as Keewaydin Island.

With more than 100 miles of waterways, Marco Island is a boater’s paradise. The island houses several working marinas as well as the Marco Island Yacht Club. Keewaydin Island is a popular destination for locals and widely recognized as one of the best boating beaches in the area. Reachable only by water, the beach is actually a nature preserve with no bridges, cars, or roads, and provides a sun-drenched sanctuary. Exploring Marco’s network of estuaries via canoe or kayak makes it easy to get up close to the manatees, sea otters and other marine creatures native to the area. Fishing is also plentiful with options ranging from casting off the iconic Judge S.S. Jolley Bridge as well as beaching a boat on a mangrove to hook tarpon and snook. Tucked away within the lakes and wetlands are both private and public golf courses that combine love of the green with scenic wildlife and a “nature park” feel.

Beyond its sun-drenched beaches, Marco also offers upscale shopping and a variety of restaurants that specialize in al fresco dining and refreshing libations. Despite its allure, Marco has been able to preserve its secluded, island vibe with limited traffic and a casual atmosphere.

Long before the tourists arrived, Marco Island was the domain of the Calusa Indians, dating as far back as 500 C.E. When Columbus famously arrived to explore the new world, the Calusa had long been active along the lower Gulf coast. The Calusa were meticulous woodworkers who carved beams and planks for their homes and docks as well as the hollowed-out canoes they used to fish and hunt. In the 1890s, anthropologists discovered the Key Marco Cat — a carved wooden artifact from the Calusas now on display at the Smithsonian Institution in Washington, DC. Despite the Calusa influence, it was the Spanish explorers who helped name the island calling it “La Isla de San Marcos” after Gospel writer St. Mark.

Modern day development began in the late 1800s with the arrival of William Thomas Collier and his family. Collier’s second son, Captain Bill, proved to be one of the island’s most famous entrepreneurs in opening the Olde Marco Inn which endures to this day. Ferry service began on the island in 1912, which operated between Marco Island and the Isles of Capri. Another famous Collier (no relation) and influential figure in Florida history, Barron G. Collier, purchased a large amount of land on Marco Island in the early 1920s, incorporating the island as Collier City in 1927. The Mackle brothers of Deltona Corporation helped transform the sleepy resort island into the tourist destination it is today. The brothers purchased large amounts of land for $7 million from Collier’s heirs in the 1960s. The Mackles’ vision called for a complete range of resort and leisure living with resort-style homes, hotels, a golf course, public parks and even land for medical facilities. A brilliant ad campaign brought inquiries from around the world. The flood of interest and increase in population helped drive the construction and opening of the S.S. Jolley Bridge in 1969, making access to the island all that more convenient. Today Marco Island attracts visitors from all over the world with a peak winter season population of 40,000. Its abundance of natural resources and friendly people continue to drive demand for property.

To experience the true luxury of living on Marco Island, consider taking your condo search to the luxe Habitat at Marco. This mid-rise condo property sits on the northern end of Marco Island in ... Read more

For the combination of seclusion and Florida Beach life, you cannot go wrong with Hideaway Beach on Marco Island. This gated community sits right on the Gulf of Mexico, with hundreds of acres of ... Read more

Marco Island is a fantastic option for prospective homebuyers to consider, whether you’re searching for an existing home or ready to build the home of your dreams. If you’re considering ... Read more

Enjoy the luxury of Marco waterfront living when you choose from one of the available units of Admiralty House. This established condo community was first built in the mid 1970s and is still ... Read more

From condos to sprawling estates, Marco Island offers some fantastic residential options. The island’s only true skyscrapers are part of the exclusive Cape Marco neighborhood. Situated on ... Read more