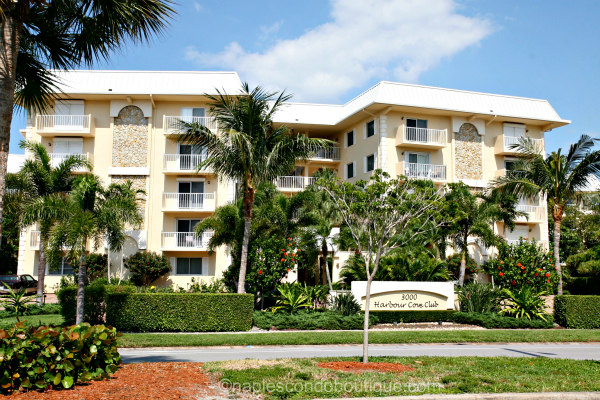 Harbour Cove is a bayfront condominium development located at The Moorings neighborhood in Naples, Florida.  This four-story community has 68 units and was delivered in 1975.   Floor plans at Harbour Cove feature two and three bedroom configurations with 1,131 - 1,684 SF of living space and two parking spaces.  Residents enjoy views of Venetian Bay.  Read more about Harbour Cove.

Harbour Cove At The Moorings Condos For Sale

Amenities at Harbour Cove include a bayside swimming pool, sauna, bike storage and aBBQ and picnic area .  Boat slips providing gulf access via Doctors Pass are available for lease, subject to availability.  Beach access is available across the street from Harbour Cove.

Pets are not allowed at Harbour Cove.  The association allows three leases per year with a minimum lease term of 60 days per lease.

Harbour Cove is located in the Moorings neighborhood on Gulf Shore Boulevard between Harbour Drive and Park Shore Drive.  This location is within walking distance of Venetian Village and offers convenient access to Naples attractions including Old Naples and Waterside Shops.