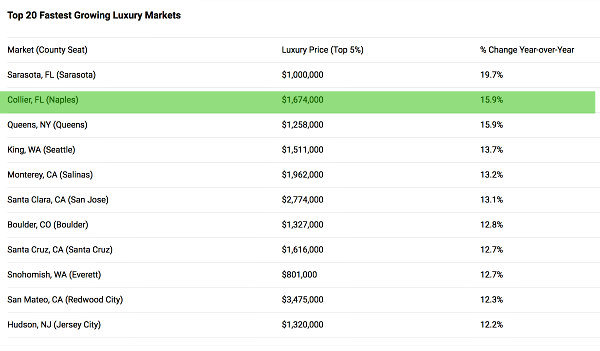 Luxury home prices are on the rise across much of the nation, with the Naples area topping much of that growth. According to industry reports, US luxury home prices surged sharply during the first few months of the year, spurred in part by a shortage of available luxury housing in places such as Naples.

That’s only helped to push prices up even more, and even faster than the rest of the housing market. Considered the top five-percent of all home sales, the luxury home market is growing the fastest in areas such as Collier County, and inventory is moving just as fast.

Demand is especially strong in Southwest Florida, home to two of the fastest growing luxury communities in the nation: Sarasota and Naples. While luxury home prices are up nearly 16-percent in Naples year-over-year, the change tops 19-percent in Sarasota. As luxury prices recently crossed $1 million in Sarasota, they already top $1.6 million in Naples.

Luxury homes in the two cities are also sitting on the market for fewer days. Some point to buyers from Northern states helping to push the market. While the luxury market is up in Southwest Florida, luxury home prices in some northern cities have actually declined. Even so, when looking nationwide, the average luxury home price is up nearly eight-percent.

As for Naples, the luxury market typically suggests properties listed upwards of $2 million, many of which offer up incredible water views. From championship golf courses to private beach clubs, the luxury homes of Naples have it all.

You’ll also find luxury communities with tennis and sports clubs, plus some new construction communities with an array of added desirable features and finishes. When it comes to luxury homes in an impressive setting, you cannot go wrong with the upscale homes of Naples, Florida.