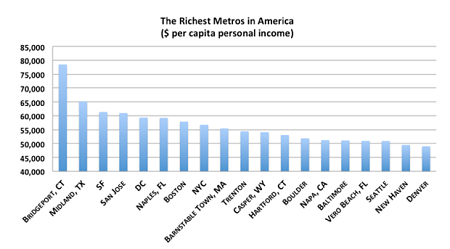 Naples was recently ranked as the sixth richest metro market in the country in a report released by the Bureau of Economic Analysis on personal income for 2011. At just under $60,000 per capita, we were the top city in Florida and the only Florida city in the top 10.

While several of the top 10 markets like San Francisco, San Jose, Boston and New York have robust employment markets where wealth creation   occurs organically, Naples has very different dynamic.  Our stellar wealth ranking is a result of wealthy citizens relocating here and bringing their riches with them.  If you are considering a move to a tropical location and want to be around other wealthy people, here is a resource to view Naples luxury real estate options.