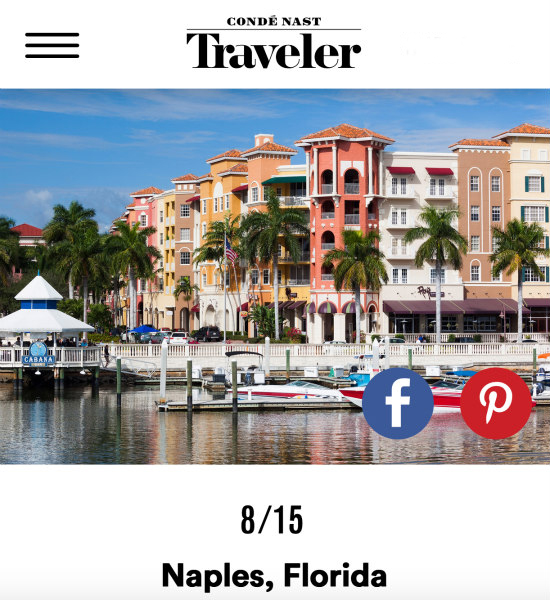 Whether simply lounging on one of the area’s fantastic beaches or visiting exciting sites and attractions, Naples gets high marks from travelers, most notably for its favorable location and area attractions. The city was recently designated one of the nation’s top travel destinations when it comes to big cities.

Voted on by readers of Conde Nast Traveler, Naples snagged the number 8 spot, the only Florida city to make the list of the top 15, surpassed only by other large cities such as New York, Chicago, San Francisco and Honolulu. The publication pointed out the destination’s continual sunshine, plus amazing restaurants, shops, hotels and golf courses. Described as a “great place to retire”, Naples was also specifically mentioned for the sugary white sand beaches of Delnor-Wiggins Pass State Park and at Clam Pass Park, plus the dolphin watching and fishing available along Naples Pier.

The website Touropia additionally lists Naples as one of the top 10 best places to visit in the state, remarking this wealthy city offers luxury homes and spectacular scenery, with residential development right on the shore. Along with a sensational city beach, Naples gets high marks for it nearby wildlife refuges, such as Florida National Wildlife Reserve, Everglades National Park and Corkscrew Swamp Sanctuary. The city also receives rave reviews for its shopping and arts districts.

Additionally, two other recent studies list Naples as a top retirement city, including Kiplinger and Smart Asset. In these studies the city gets high marks for the well being of residents, active lifestyles, air quality and access to medical care. An estimated 21,000 residents call Naples home, though the Southwest Florida city continually attracts new visitors each year, lured in large numbers by its fantastic weather, sensational beaches, desirable shopping and dining and access to plentiful recreation and nearby attractions.