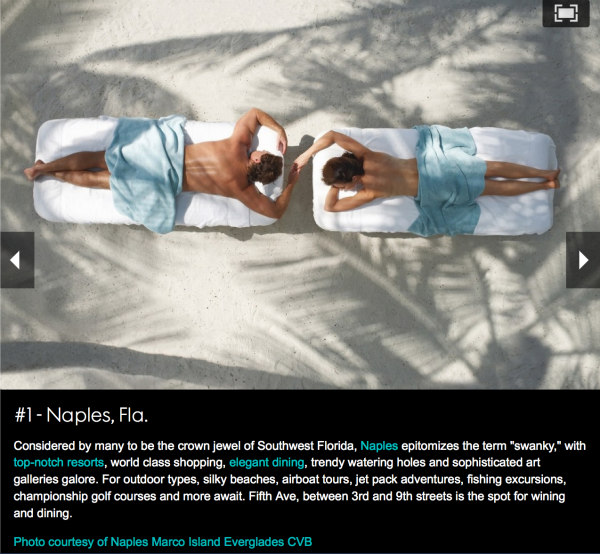 Readers nationwide of USA Today newspaper and 10Best have chosen Naples as the top winner for “Best Destination for Luxury Travelers.”  With a coveted spot at #1, Naples won kudos as a luxury travel destination thanks to its top-notch resorts, world-class dining, splendid art galleries, and excellent high-end shopping.  As an ultra-luxe Gulf of Mexico beach town on Florida’s southwest coast, Naples ranked better than any other city on the list!  All cities selected were only within the United States; no international cities were considered for this poll.

While the Top 10 winners were decided by popular vote from readers, a panel of travel experts picked the list of 20 nominees altogether.  Experts included award-winning travel writers, veteran journalists, travel bloggers, and others chosen based on their broad knowledge of the luxury travel industry.  In a separate industry poll, Forbes magazine has called Naples one of the “Top 25 Places to Retire Rich.”  According to Forbes, Naples holds enormous appeal for the affluent elderly.  Approximately 42% of Naples residents are at least 65 years old.  While Naples is home to a stunning 10 miles of beachfront, the area enjoys more golf holes per capita than any other city in the United States.  The average home price here in Naples is $520,000, a significantly higher price compared to other U.S. cities.