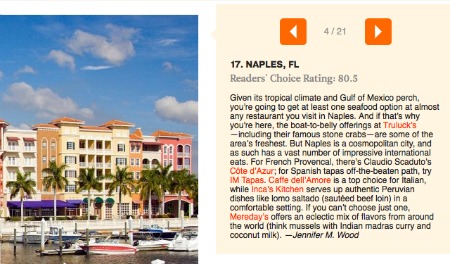 Naples is known for its tropical climate, upscale shopping, fantastic views of the Gulf of Mexico and also as a slice of culinary paradise.  Conde Nast Traveler’s magazine voted Naples as one of the top cities for foodies in the U.S. on its hot Top 20 list for Best American Cities For Foodies.  In the publication’s annual Readers Choice Survey, travelers who love to eat gave Naples its highest ratings for its seafood and other culinary delights.

Naples made the list for its mix of international and fine dining options.  Boat-to-table fresh seafood in restaurants are plentiful in coastal Naples.  Some of the freshest seafood is found at Truluck’s, including their famous stone crabs.  But international food can also be found at wonderful restaurants in Naples, given its cosmopolitan flair.  Fabulous French food is highly recommended by readers at highly regarded Cote d’Azur; Spanish tapas at IM Tapas; Italian classics at Caffe dell’Amore; and Peruvian eats at Inca’s Kitchen.

At least one seafood option can be found on the menu offerings of any restaurant in Naples.  For adventurous eaters, Readers rate Mereday’s fine dining as a top choice for its eclectic cuisine of flavors from around the globe.  Gulfshore Life named Mereday’s as Best New Restaurant in Collier County earlier this year.

Naples landed at #17 on the list alongside other American cities well-known for their food, including San Francisco, New York, Charleston, and Austin.  Naples continues to accumulate national and international accolades in 2014.  Naples was recognized as one of the best romantic getaways in North America by USA Today Travel Readers of 10Best, and received accolades as a golf destination as well.