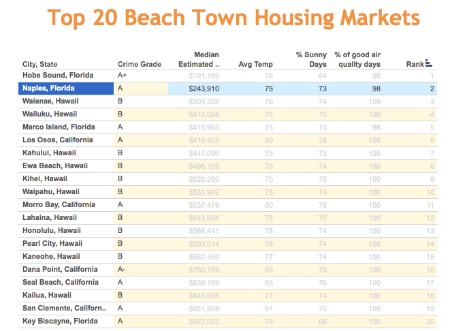 Of all the beach towns in the U.S., including Hawaii, Naples ranks #2 in the Top 100 Best Beach Towns based on average temperature, percent of sunny days, percent of good air quality days and crime rates, according to RealtyTrac, the nation’s leading source for housing data.  The top 20 markets all had median home values below $1 million.  Naples offers residents privacy in meticulously maintained upscale-gated neighborhoods but also affordable homes in many neighborhoods.

A RealtyTrac executive says that buying near the beach is one of the best ways to ensure a property will appreciate in value due to unlimited demand and a finite supply of land to build on.  Three other Florida beach towns landed in the top 20---Hobe Sound, Marco Island and Key Biscayne.  But Naples shines head and shoulders beyond its competitors.  Pristine white sandy beaches along the Gulf of Mexico, Naples plays host to gorgeous golf courses, world-class shopping and arts and cultural venues.  Tasteful new master-planned communities and urban shopping like the Mercato dot Naples’ landscape.  Unmatched beauty in Naples lies in sunsets on the Gulf of Mexico.  Naples has been named one of America’s best beach towns for its lovely beaches and lively outdoor cafes, art galleries, museums, high-end boutiques, and entertainment scene.

Once a secret hotspot tucked away for the wealthy, Naples has evolved into a city with an international arts and culture.  The Naples Philharmonic and Art Museum host over 400 events in addition to local art galleries and outdoor concerts.  In downtown, Third Street and Fifth Avenue showcase streets lined with world class shopping and upscale waterfront dining.  But Naples is so much more: Bordering the Everglades National Park, Rookery Bay, Ten Thousand Islands and beautiful beaches, it’s a nature lover’s paradise perfect for exploring bird wildlife, manatees and kayaking.