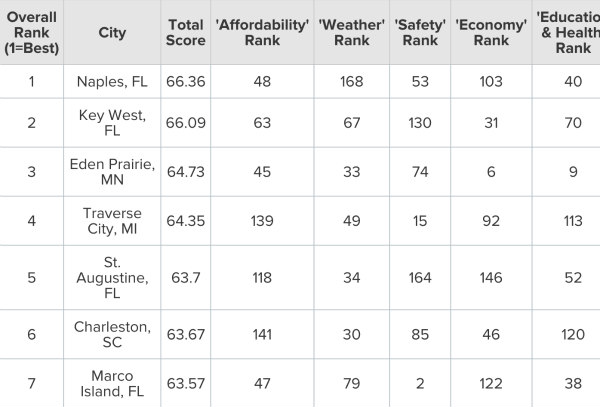 Widely known for its fantastic weather and exceptional scenery, Naples now holds the distinct honor of being known as one of America’s best beach towns. More specifically, it’s one of “2017’s Best Beach Towns to Live”.

That’s according to WalletHub, a personal finance website that’s now proving to everyone the desirability of a Naples lifestyle. According to the newly released ranking, Naples is at the very top of the list, snagging the number one spot for things like weather, the economy, health and education and safety.

Affordability also came into play, but quality of life helped boost the city to the top. Broken down, quality of life was comprised of everything from the number of area attractions to the average commute time, along with golf courses, walking and running trails, swimming pools and public beaches.

All cities on the list have a population of between 10,000 to 150,000 residents, with one or more beaches mentioned on TripAdvisor. In total, WalletHub took into account more than 200 cities, and then compared dozens of livability indicators to come up with the scoring. The data analyzed everything from the quality of beach water to the share of waterfront homes for sale.

On a 100-point scale, Naples received more than a 66, the highest of any other location studied. Of the top 30 locations for 2017, roughly a third were beach towns in Florida.

Taking a closer look, Florida beach towns dominated the top places, with six of the top ten locations mentioned on the list found in Florida. Coming in at number two was Key West, followed by St Augustine at number five, Marco Island at seven, Key Biscayne, coming in at number eight, and Boca Raton at number nine.

With sugary white sand, the beaches of Naples range from state parks to those fronting luxury condos and downtown destinations.