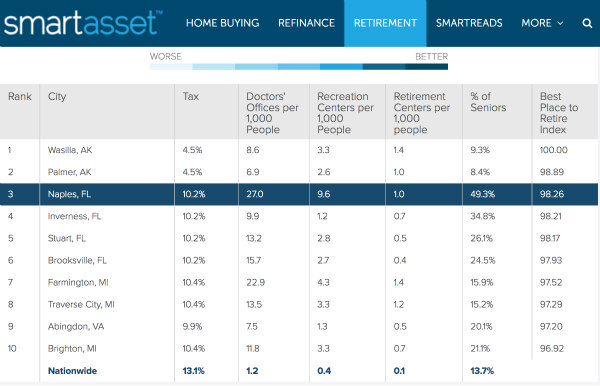 While Florida may be known as a desirable destination for retirees it turns out Naples routinely ranks at or near the top of the list itself. Two recent studies give Naples high marks for attracting retirees, noting such desirable features as the city’s medical care and recreational options.

This includes a report from finance and business publication Kiplinger. In that particular ranking Naples receives top honors in the list of “12 Great Places to Retire for Your Good Health”. The city was rewarded for its air quality, active lifestyle and longevity, plus its overall well-being, social well-being and community well-being. The publication remarked Naples residents are less stressed than those who live in most other cities and they eat healthier.

The financial technology company SmartAsset ranked Naples as the top Florida city for retirement based on things like social opportunities, medical care, recreation and taxes. The only Gulf Coast city on the list, Naples collectively received the highest rating of any city in the state for the number of recreation centers, doctors’ offices, retirement centers and the total percentage of seniors who make up the city’s population.

While Naples led the pack in the state of Florida the city came in at an admirable number three when looking nationwide, behind two cities in Alaska. Taxes were higher than other places but the percentage of seniors living in Naples stood at nearly 50% compared to the national average of less than 14%, coupled with a high number of rec centers and doctors’ offices in the city.

Along with its senior-friendly amenities, Naples is also renowned for its beautiful beaches, prime fishing and stunning homes. There are now around 21,000 residents who call Naples home, a far cry from the old days when the city was simply known as an old fishing village.