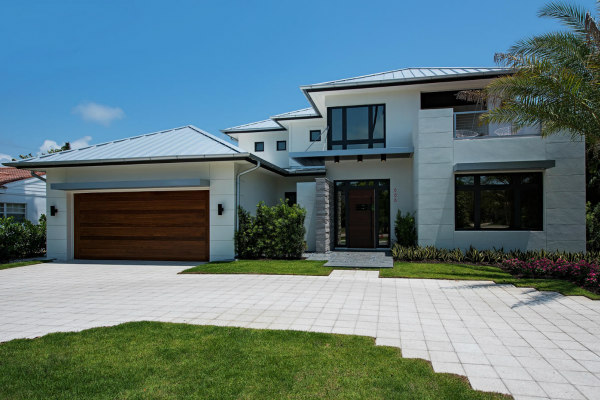 Sports radio personality and television host Colin Cowherd has sold his contemporary home in Naples for $3.9 million.  Cowherd sold his home to former president and chief executive officer of Best Buy, Allen Lenzmeier, who bought the home located at 688 Third Street North.  The Old Naples house went on the market in April for a list price of $4.25 million.  The two-story, four bedroom-four bathroom Naples home was completely renovated this year.

The sprawling home includes porcelain tile floors, a floating steel and wood staircase, and walls made with mosaic stones, a center-island kitchen, office and loft.  The spiral staircase leads to a second-floor terrace patio.  The 3,562 square foot home interior features an open floor plan that flows from the living room into the dining space.  The four bedroom-four bathroom home features a master suite with a sitting area, two vanities, and a rain shower in the master bath.  One of the bedrooms has turquoise-colored floors and built-in bunk beds.  Rows of windows and bi-folding doors made with glass bring in abundant natural light, and brings the feeling of the outdoors inside.  An outdoor veranda opens to a pool, raised spa, fire pit, and built-in barbeque area.  Architect Matthew Kragh designed the house completed this year.

The 51-year old radio host originally purchased the home in 2013 for $1.325 million.  Cowherd previously was an ESPN sports radio and television host for more than a decade, before moving to Fox Sports in August as an on-air personality.  Last year, Cowherd sold his two-acre, five-bedroom Colonial-style house with a library and media room in West Hartford, Connecticut, then proceeded to buy a five-bedroom East Coast-style five-bedroom home for $3.095 million with a paver patio and built-in barbecue in Manhattan.  He currently hosts the sports talk program, “The Herd,” on Fox Sports Radio Network.