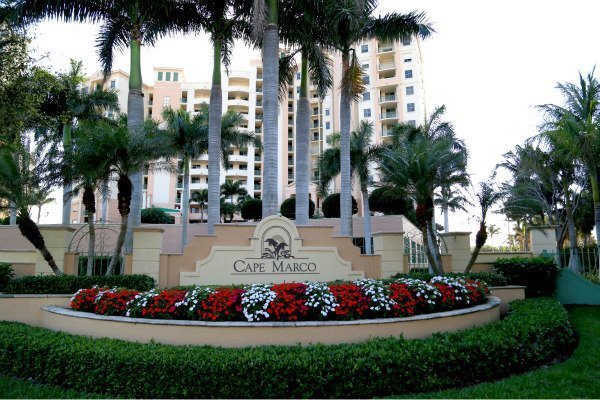 From condos to sprawling estates, Marco Island offers some fantastic residential options. The island’s only true skyscrapers are part of the exclusive Cape Marco neighborhood.

Situated on the island’s southwest corner, Cape Marco actually consists of six amazing residential high-rises. Each contains its own luxuries, from its private residences to its added amenities.

One of those towers is called Belize. Constructed in the mid 2000s, the building offers nearly 150 sophisticated residences, mostly ranging from around 2,600 to 4,000 square feet of living space. There are also, however, some sweeping penthouse units, some of which include more than 7,000 square feet of living space. Two grand penthouse units are even larger.

The building also contains a billiards room, a movie theater, a fitness center and guest suites. In addition, you’ll find a library, a grand salon, private cabanas and a pool.

Another outstanding high-rise in Cape Marco is Veracruz. This building was also built in the mid 2000s. As the final tower constructed at Cape Marco, Veracruz consists of around 120 units, mostly ranging from an impressive 3,800 to more than 5,000 square feet of living space.

A handful of penthouse units in the building top out at around 10,000 square feet. One of the more unique additions to the property is its pool over pool design, plus you’ll also find tennis courts, a fitness center and covered parking.

Yet another outstanding option exists with Cozumel. This tower was constructed in the late 1990s. Cozumel features around 120 private residences. It also offers the advantage of direct beach access, a fitness center, a billiards room and a swimming pool.

In addition, the high-rise offers access to covered parking, tennis courts and a social room. Each unit in the building overlooks the Gulf. The units of Cozumel come with high ceilings, marble flooring and other sophisticated additions.